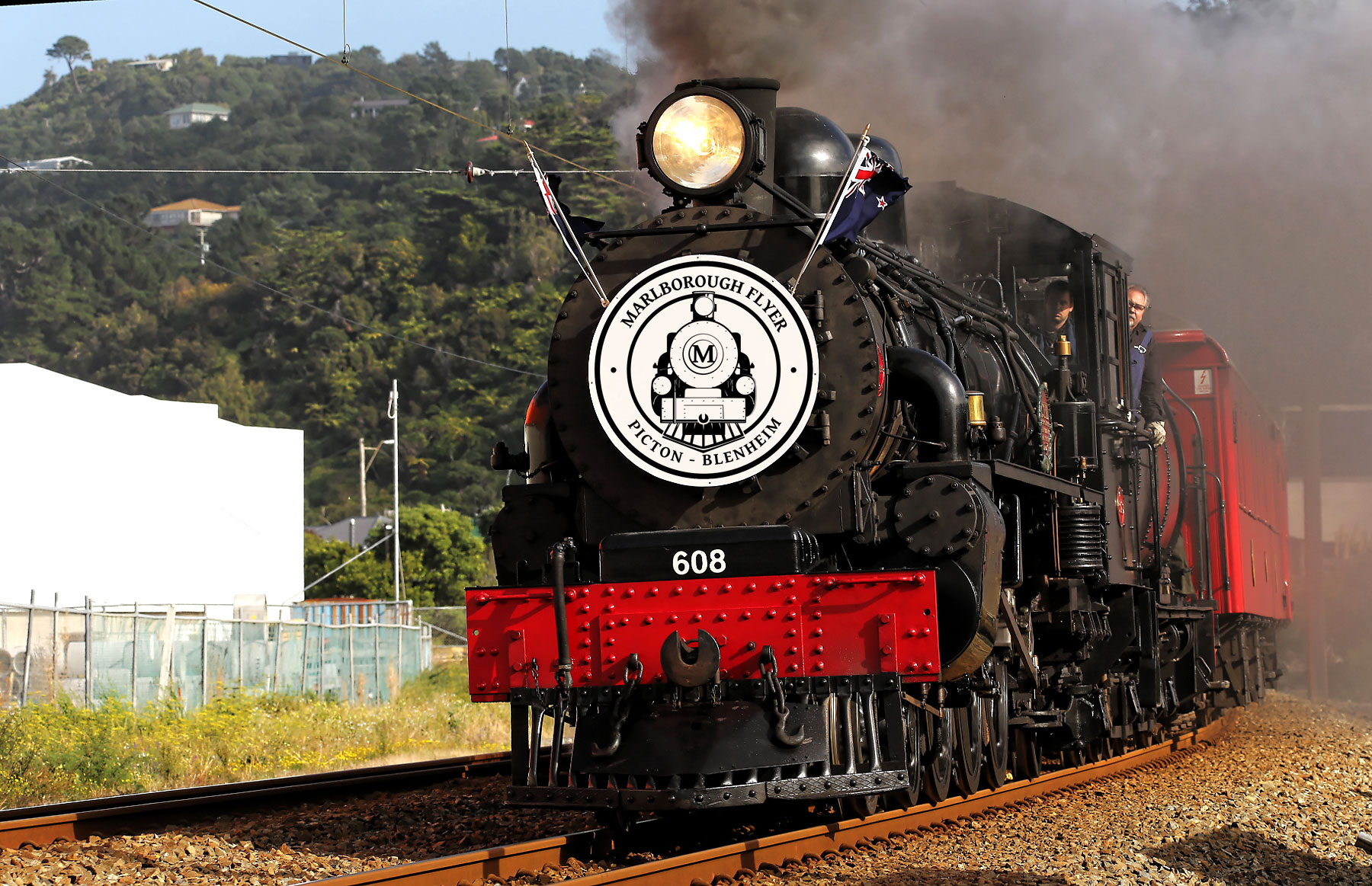 THE “MARLBOROUGH FLYER” IS ON TRACK!

A BOOST FOR TOURISM AND JOB CREATION IN THE MARLBOROUGH REGION

The magnificent heritage steam train that will launch on 1st December this year between Picton and Blenheim has been officially named “The Marlborough Flyer”.

Comments Paul Jackson, managing director of Pounamu Tourism Group, the company behind the Marlborough Flyer, “The name was partially inspired by the Kingston Flyer which has links to the region (we respectfully acknowledge the recent sad passing of the late David Bryce from Renwick who purchased The Kingston Flyer in 2011), and which also used Ab class locomotives, the same class that the Marlborough Flyer will operate. The emotions and passions of the old “Flyer” days still stir deeply amongst rail fans throughout New Zealand.

Marlborough is fast becoming a world-famous region; attributable in part to her beautiful natural assets, like the Marlborough Sounds and surrounds, and in part to the marketing efforts of the burgeoning wine and food industry, aviation heritage and numerous other successful business enterprises. Marlborough is establishing itself as a recognisable brand overseas, so with these two pillars combined (“Marlborough” and “Flyer”), the christening of The Marlborough Flyer was one which resonated with all stakeholders and rail fans alike.”

Continues Paul, “The launching of the Marlborough Flyer is an exemplary example of what can be achieved when private enterprise, state-owned enterprise, government and the unions work closely together towards a positive outcome for the community and for the regional economy. On behalf of Pounamu Tourism Group and our partners at Steam Incorporated, I would like to thank KiwiRail, the Rail and Maritime Transport Union (RMTU), Port of Marlborough and the NZ Transport Association for making this tourism venture possible and for sharing in our vision to create a new and attractive tourism product.”

“Of paramount importance was the support of the Rail and Maritime Transport Union and KiwiRail. KiwiRail have a great group of kiwis working for them who often float under the radar quietly going about their daily business. The progress they have made on the enormous task of getting the mainline back in operation after the Kaikoura earthquake, borders on superhuman, and they deserve accolades for how quickly and efficiently they have embraced the challenge of reconnecting the community down there. Their efforts are often understated and underestimated.

Mr Alan Piper, Group General Manager Sales and Commercial at KiwiRail says, “The Flyer is a great local initiative celebrating New Zealand’s rail heritage while providing a boost to the region. KiwiRail is always keen to support tourism in our regions and has seen a big increase in our tourism services bringing economic growth to areas such as the West Coast and Marlborough. There is a real romance to rail travel that international tourists are looking for as well as local enthusiasts, and still no better way to see our glorious countryside than by train.”

Of course, with any new tourism venture one of the immediate benefits is job creation.

As General Secretary of the Rail and Maritime Transport Union, we are proud to support job creation for our members many of whom will be playing a critical role in the efficient and safe operation of The Marlborough Flyer. We wish the venture every success.”

It is hoped that the added attraction will assist to improve the overall cruise ship visitor experience in Picton and in doing so encourage more cruise ship visits to one of the most popular ports in Australasia.

Says John Bovis of Steam Incorporated, “The Marlborough Flyer locomotive is the historic World War I Memorial locomotive Ab608, “Passchendaele”. Built in 1915, a major rebuild of the locomotive was completed by our team at Steam Incorporated, in 2014. It is certified to operate on the main line and since overhaul has run 10,000 Km covering much of the KiwiRail network.”

“During the steam era, the Ab class was the largest type of locomotive operating on the Picton – Blenheim route. October 2017 is the 100th Anniversary of the Passchendaele Battle and the launch of the Marlborough Flyer will help reinforce the memory of this battle.”

The Marlborough Flyer will focus on cruise ship days, however on selected Sundays every month, from December 2017 to March 2018, there will be “Super Sunday Specials”. These are special days for Marlburians and for the general members of the public to enjoy The Marlborough Flyer experience with friends and family at a special discounted rate.

The support from big business has been positive and early on some prestigious brands have identified value in being associated with The Marlborough Flyer. They have taken “ownership” of Carriage Sponsorships, all five carriage sponsorships are now sold. The brands that have supported the venture from the onset, in doing do have made the “Super Sunday Specials” financially viable at reduced rates for the general members of the public – credited for this are Saint Clair Family Estate, The Ned of Marisco Vineyards, Lawson’s Dry Hills, Peter Ray Homes and Harcourts Marlborough.

Full steam ahead for The Marlborough Flyer!

Bookings are essential to avoid disappointment and can be made online on:

Full steam ahead for Picton to Blenheim train plans